The Only Prayer You’ll Ever Need 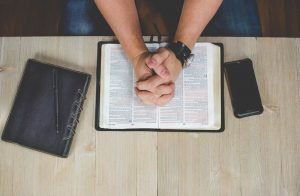 Have we as Christians allowed the Lord’s Prayer to become like a ritual in our lives? Are we missing the real treasures contained within it? It’s one the most familiar passages in the Bible, and it’s also where Jesus teaches his disciples how to pray.

The Lord’s Prayer is one of the first things we often learn as children, and as new Christians. We can recite it from memory in church on a Sunday, and even Australia’s Federal Parliament opens each day reciting the Lord’s Prayer.

Dr. Douglas K. Fletcher is from Princeton Theological Seminary in the United States, and his new book is called, ‘The Only Prayer You’ll Ever Need’. Douglas explains how The Lord’s Prayer can help us have more meaningful conversations with those around us.

Different denominations express the Lord’s Prayer in their own unique ways. Douglas says that people sometimes feel awkward when they go to a worship tradition that’s not their own, especially when it comes to something like the Lord’s Prayer.

“These things are a part of the history of the English translations of the Lord’s Prayer,” says Douglas. “But the differences are really quite slight. In Luke, the distinction is made that only God can forgive sins, but we can forgive the debts of one another. The different language can provide more richness for us.”

The familiarity we have with the Lord’s Prayer can sometimes lead us to miss the extraordinary treasures that are hidden in this prayer.  But Douglas says that we also look at it as a teaching tool. The disciples could have asked Jesus to teach them to perform miracles, or to debate the Pharisees. But the one thing they asked to be taught was how to pray.

“And Jesus said to them, when you pray, pray like this,” says Douglas. “He didn’t say, pray these words. He said, pray like this. That puts us on a path of understanding what this prayer contains and how it goes beyond just a simple recitation.”

It’s a prayer for a perspective on life that always remembers the sacred, and not just what we see in front of us. Jesus walked in the midst of people, and ultimately the prayer focuses on the holiness and sacredness of God.

When we look at the Bible, Jesus said at one point in the Garden of Gethsemane, Father take this cup from me. That’s a crisis prayer. But the Lord’s Prayer gives us a form and a frame for a life of daily prayer, it starts from a place of alignment. Sometimes we need to move from where we are and see things differently.

“God cares about other people, and that we live in relationship with others. I believe that Jesus’s prayer offers us a gracious way to have meaningful conversations with those around us.”